The Regional Natural Park of Frasassi e Gola della Rossa is the “green heart” of the Marche Region.
Born in September 1997 (Law No. 57 of 02.09.1997), with its 10.026 hectares, it is the largest protected regional area and includes the hypogeum complex of Frasassi Caves. 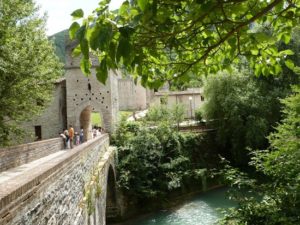 A trip to the Park is a “journey into the heart of the Marche”, discovering the historical and artistic treasures, hidden by landscapes rich in charm and harmony, immersed in a luxuriant and luxuriant nature.
The natural scenarios just described are included in a larger area, that of the Montana community of Esino-Frasassi, with its rich historical, archaeological and cultural riches.

The Park is an oasis of nature that offers the possibility of hiking in its many trails, admiring the rich flora and fauna richness of the pre-Apennine environment.
Interesting are the natural phenomena that involve this area: karstism and the presence of sulphurous springs.
Gorgeous example of karst is the suggestive Frasassi Gorge, excavated by the erosive waters of the Sentino River which for millennia has shaped these places, creating rocky cliffs and giving rise to an underground kingdom of unmatched splendor: the Frasassi caves.
Apart from the marvels of Karst phenomena, the area is a jewel of biodiversity with its 105 species of nesting birds, 40 species of mammals, 29 reptiles and amphibians and over 1250 species of plants.

The fauna that inhabits the Frasassi e Gola della Rossa Park highlights species of remarkable naturalistic value for the Marche.
Among the birds there are 105 nesting species of the 124 present in the Province of Ancona.
The Royal Eagle represents the summit of the food chain made up of mammals, birds, amphibians and crustaceans; in the park, precisely in the throat of Frasassi, nests the only couple in the Province of Ancona. Important is also the presence of other daytime raptors such as the Witch, the White, the Real Nibble, the Lanario Falcon and the Pilgrim Hawk.
The Night Rapats are represented by the Civetta, the Barbagianni, the Allocco and the Gufocomune; was also recently confirmed the presence of the Royal Owl in a Park area. 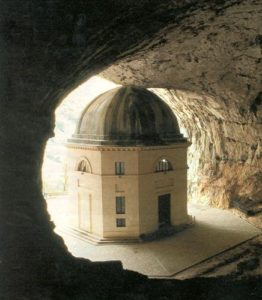 Among the mammals is the presence of the wolf, which has recolonized the Marxian backbone in the last decade thanks to the legal protection of the species and to the demographic expansion of prey species such as wild boar, deer and deer and recent deer sightings. There is the presence of the wild cat and skunk, in addition to the most common fox, weasel, faina and rate. Among the rodents, in addition to the most common squirrel and porcupine, the Park includes rare and elusive species such as quercino mice. Among the insectivorous mammals there are the Riccio, the animal symbol of the Park, the Blank Mole and the Toporagno.

The many hypogeum cavities in this area are populated by more than ten different species of bakeries. The Park Bats colonies are among the most important in Europe, with over 12,000 Miniatures, present in both wintering and reproductive nurseries. Among the cave fauna, in addition to the geotriton, is remarkable the presence of the Niphargus, a rare and tiny crustacean that populated the caves of the caves.
As far as flora is concerned, in the limestone areas of the hilly plan, there are widespread black hornbeam woods, on those marnoso-arenaceous woody roverella sometimes with cerro.

Beech woods grow in the mountain top. On the hottest slopes of rocky gorges, the vegetation is typically Mediterranean with leccio, wild beetle, terebinth, fillirea, corbezzolo, asparagus and strawberries.
Large areas of the Apennine ridge have been affected by reforestation operations since the end of the last century.
The plants were mostly made with resinous materials such as: Austria’s black pine, pine nuts (P. pinea), sea pine, Leppo pine, white spruce, Greek spruce, cedars and cypresses. In the territory of the Park, extensive formations are found especially in the relief areas.

There are many rare botanical species in the Park, among which the papulus Moehringia is known only in the Frasassi, Red and Furlo gorges, Potentilla caulescens, Rhamnus saxatilis, Saxifraga australis and Ephedra major , wreck of Era Terziaria. From the historical and artistic point of view, the territory of the Park is rich in a dense network of castles and monasteries of which there are many vestiges. Among the most important are:
The large historical centers of Arcevia and Serra San Quirico, the Sanctuary of Frasassi, the abbeys of Sant’Elena, San Vittore delle Chiuse and Valdicastro, the castles of Genga, Pierosara, Avacelli and Castelletta.

In the caves of Frasassi caves, in a cave overlooking the breathtaking view of the Gorge, find shelter