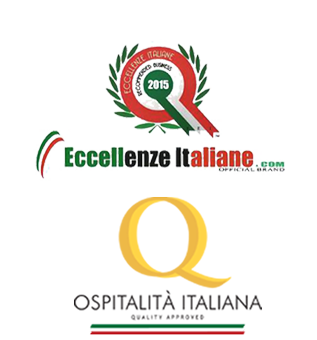 Jesi and its Castles

10 things to do and see in Jesi

Jesi, a Marche town in the province of Ancona, a casket of history, art, culture in the midst of the hills, halfway between the sea and the mountain. Its origins are ancient: from the Roman colony in 247 BC, saw the birth of Federico II of Swabia in 1194 and the composer Giovanni Pergolesi in 1710. Surrounded by a walled city among the best preserved in the region has the title of “Exemplary City” Unesco for the ability to preserve a highly suggestive architectural, artistic and cultural secular heritage.

1. A walk through the discovery of the ancient walls

The historic center of Jesi is enclosed within a sturdy walled city, one of the best preserved in the entire region. It measures 1.5 km and embraces an architectural complex that harmoniously integrates buildings of different ages. The whole old town is made up of churches, palaces and squares with paved alleys and narrow streets. Walking through its lanes is like traveling back in time … Of the original doors count at least seven. Here is an interactive map of an interesting walk to discover the major points of interest within the walls.

2. The Place where Frederick II was born

After a nice lap of the walls we start our itinerary of the historic center from the famous Federico II Square, the most important and ancient of the city. You think its space is largely in line with the area of ​​the ancient Roman forum. Tradition wants here to be born, on St. Stefan’s Day of 1194, under a specially erected pavilion, Frederick II of Swabia (to find out more read this post). The event is recalled by a plaque written in several languages, on the facade of Palazzo Ripanti. Just at Palazzo Ripanti we suggest you go to visit the Diocesan Museum that collects testimonies of sacred art that tell the religious life of the people of Vallesina throughout the centuries.

3. Piazza Colocci and the Palace of the Signoria

The next destination is Piazza Colocci where stands the Palace of the Signoria, recognized as one of the most significant public buildings of the Marche. Do you know that a rampant lion roars above the portal, the heraldic animal of the city depicted in the form of a bas-relief? The 15th century palace houses the Planetarium Library, rich in over 115,000 volumes and the Municipal Archives. The chicca? The Major Room with the sixteenth-century wooden coffered ceiling and the eighteenth-century wooden shelving of the ancient Pianetti bookstore.

After a visit to the beautiful building let yourself be captured by the atmospheres of other times by visiting:

4. The temple of the Italian lyric: the Pergolesi Theater

From Piazza Colocci, continue towards Piazza della Repubblica, the center of the cultural life of the city. Here stands the Teatro Giovan Battista Pergolesi, a scenic temple of Italian opera, built between 1790 and 1798. Famous for its perfect acoustics, inside, in a triumph of gilding and rococo decorations, there are paintings and frescoes. It was titled to the famous violinist and composer Giovanni Battista Pergolesi, born in Jesi and became one of the greatest musicians of Italian baroque. The theater is home to one of the richest seasons of the Marches. If you are passionate about this kind of music, do not miss the Spontini Pergolesi Festival that this year will take place from 4 to 20 September 2015.

5. A walk along the Matteotti course to the Arch of Clementine

From the central Piazza della Repubblica begins the shopping street: the Matteotti course, a long prospective and strongly scenic axis whose focal point is the Arch Clementine, a triumphal arch built in 1734 in honor of Pope Clement XII of the Orsini for the ‘ abolition of the duty on wheat. Along the promenade, you can continue to visit churches and palaces. Here you can find an interactive map of an interesting walk to discover the main points of interest along the course. 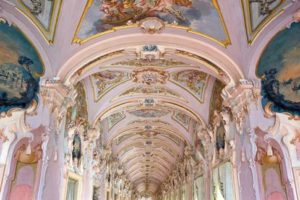 6. Admire the art of Lorenzo Lotto at the Civic Picture Gallery and Palazzo Pianetti

Walking along the course take the parallel via XV September: a surprise awaits you! Here stands the elegant Palazzo Pianetti, home to the Pinacoteca Civica, which houses the beautiful Stucchi Gallery over 70 meters long and a large group of works by Lorenzo Lotto, among which stands out the grandiose masterpiece of the Pala di Santa Lucia.

Do you know that Jesi was officially proclaimed the European Sports City for 2014 by the ACES (European Sports Capital Association)? Fencing, soccer, skating, motorcycling, athletics … there are so many jesni sportsmen who have collected many world titles and Olympic gold medals, making the city known all over the world. Jesi’s sporting history is inextricably linked to the Fencing Club Jesi, in particular in the florist discipline, which allows him to be today the most medal of the world in the history of the Olympics with 22 medals, including 14 gold, 2 d silver and bronze 6. The city is represented by Olympic champions Stefano Cerioni, Giovanna Trillini, Valentina Vezzali and Elisa Di Francisca, all students of the master Ezio Triccoli to whom the local sports hall has been dedicated. Are you curious to see these great athletes train? You can visit the Fencing Palace by contacting the Fencing Club Jesi at 0731-205007

8. Wine and food and wine specialties

You can not leave Jesi without bringing home a delicious souvenir of your visit! Wine, oil, cheeses, cured meats, honey, figs, horses, cheese pizza … the products of this land will satisfy the most demanding palates. Here we are also in the lands of Verdicchio dei Castelli di Jesi, one of Italy’s most prestigious and famous national wines. In the territory of Jesi and Vallesina (the Esino River valley) other DOC wines are produced: two reds – the Lacrima di Morro d’Alba and the Red Piceno – and Esino that exists both in the white and red varieties. For centuries, in the jesini hills, a sweet and flavored alcoholic beverage (about 14 °) is produced, called viscous wine made with an ancient variety of wild cherry fermented in local red wine. 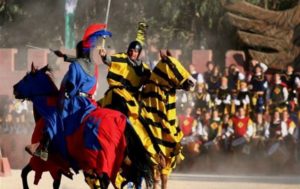 9. A dive back in time with the Palio of San Floriano

May is the month of the Palio di San Floriano, a thirteenth-century historical re-enactment with parades of figurines, flagellators, drummers and archers. The celebration begins with the traditional San Florià scampanellata for the streets of the old town, continues with the announcement of the scum, ancient music concerts, archery contests, historical parades, medieval taverns and the race of the Bell between the different towns of Vallesina.

10. Immerse yourself in the nature of the Ripa Bianca Reserve

Located on the east side of the city, the Ripa Bianca Reserve, crossed by the River Esino, offers four different natural environments: river, agricultural (with a teaching area on sustainable agriculture), calanchivo and lacustre. The latter is undoubtedly the most impressive as the site of the most important Heron breeding site in the Marche Region, easily observable from birdwatching sites. The visitor is welcomed into a Nature Center that offers a wide range of services. You can take many theme trails and reach a belvedere located on top of the slopes crossing the River Esino through a floating rafting bridge

THE CASTLES OF JESI

You have a geographical location that makes it an ideal place to stay, a starting point for discovering the famous Castles of Jesi. In a hilly landscape of dazzling sweetness the castles of Vallesina are set for the turbulent profile of their walls, within which an imposing art repertoire arises. Here is the list of castles: Serra de ‘Conti, Montecarotto, Poggio San Marcello, Rosora, Mergo, Serra San Quirico, Castelplanio, Castelbellino, Maiolati Spontini, Cupramontana, Staffolo, San Paolo di Jesi, Monte Roberto, Belvedere Ostrense, San Marcello , Morro d’Alba, Monsignor, Santa Maria Nuova. Here is an interactive map of the tour route. 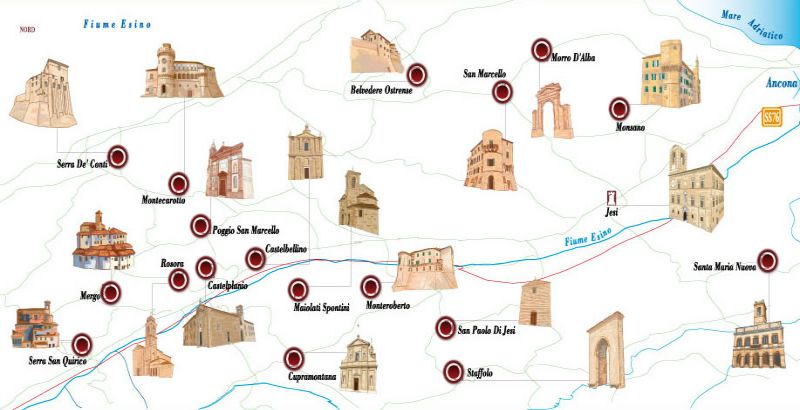