Immersed in the soft hills of the Marche, between the valley of Metauro and the valley of the Leaf, stands Urbino, a city of immense historical and artistic wealth. That’s why Urbino is easily lost with his nose up as he travels to his historic center. 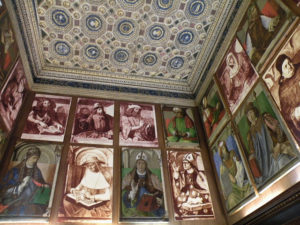 Surrounded by a long walled stone wall and adorned by sandstone buildings, thanks to the work of important Urbino artists from a simple village became the “cradle of the Renaissance” and still today, strolling through its old town, it breathes the 15th century air . A feature that has earned him the honor of joining the World Heritage List in 1998.Urbino – City Archive of Urbino Photo by Paolo Mini For UNESCO, in fact, the city has the undisputed merit of being a point of ‘ an attraction for the most illustrious scholars and artists of the Renaissance, Italians and foreigners, which have transformed it into an exceptional urban complex.
The origins of Urbino are ancient, the Roman name Urvinum derives from the Latin term urvus (urvum is the curved handle of the plow), but it is in the fifteenth century that the city lives its utmost splendor.

And, above all, thanks to the contribution of Federico di Montefeltro that Urbino acquired that monumental and artistic excellence, whose influence extensively extended to the rest of Europe.
This great patron, in fact, knew not only to transform Urbino into a magnificent princely court, but also to attract in the ducat the best that Italian Renaissance human culture could offer: Piero della Francesca, Luciano Laurana, Leon Battista Alberti, Francesco di Giorgio Martini, Girolamo Genga and Raffaello’s father, Giovanni Santi.

Walking along the steep and narrow streets meet all the buildings of the Renaissance Urbino: the former Monastery of Santa Chiara, the Church of San Domenico, the Mausoleum of the Dukes in the Church of San Bernardino, the Boghi Palace and the majestic Ducal Palace, treasure hunter.
Some of the most important crafts of the time were involved in building the palace, now home to the National Gallery of the Marche. And a visit to the Gallery is a must if you want to admire some of the masterpieces of the art history here preserved: “Flagellation of Christ” and “Madonna of Senigallia” by Piero della Francesca, “Communion of the Apostles” by Giusto of Ghent; “Miracle of the Ostia Profanata” by Paolo Uccello and the sublime “Muta” by Raffaello. Nearby do not miss the Date (the ducal stalls), connected to the Palace by the magnificent helicopter ramp.
Beautifully artistic, but also beautifully landscaped, lying between two hills, Urbino offers a panoramic view of very suggestive roofs and churches.

Curiosity
Both Bramante and Raffaello took the first steps here in Urbino. Raffaello, in particular, formed his father’s shop and started out with works commissioned by his nearby ducat places.

Every year, in Urbino, the feast of the kite takes place generally in September. This is a real race where he wins who can fly his kite higher.

In the small laboratories art has been created since the ‘500: goldsmiths, cabinet makers, ceramists, many artisans linked to the building (stuccoers, painters, carpenters, stonecutters); in the shops of the old town you can look closely at ancient techniques and new creations.

The court of Federico da Montefeltro, as described by Baldassarre Castiglione in Il Cortegiano, introduced the characteristics of the so-called “gentleman” in Europe, who remained fully in vogue until the 20th century.

The seat of one of the oldest universities, Carlo Bo, born in 1506, has more than 20,000 university colonists who are native residents, boasts a famous Academy of Fine Arts, and is also known as the “book capital” for the Institute for the Decoration and Book Illustration born in the second half of the 20th century.